The United Nations and Its Future in the 21st Century

In 2005, the United Nations is celebrating its sixtieth anniversary. This is an historic opportunity to take stock of the past and see what lies in the future. This collection of essays assesses aspects of the Organisation’s history, and what might lie ahead for it.

The United Nations is at once the symbol of humanity’s collective aspirations for a better life in a safer world for all, and a forum for negotiating the terms of converting these collective aspirations into a common program of action. Realising these goals is ever more significant at a time when the UN is facing pressures to reorganise itself.

The book discusses the far-reaching reforms the UN needs to continue to play a central role in international peace and security. Its contributors emphasise that the UN is the only body through which respect for the rule of law and adherence to multilateral treaties can be achieved.

The publication of this book is well-timed as the UN is going through a crucial period of self examination and needs reforming to make itself more relevant to the challenges of the 21st century. It includes important UN documents and the recommendations of the UN High Level Panel Report on Threats, Challenges and Change in relation to poverty, environmental degradation, terrorism, civil war, conflict between states, weapons of mass destruction, and organized crime.

The chapters in the book were originally given as lectures in honour of the UN’s free-thinker, critic and constructive analysts’, Erskine Childers. The contributors include:

is a writer and peace campaigner. He is a long time supporter of UN reforms and is vice-chairman, Action for UN Renewal. His book ‘Arms No More,’ studies the global threats posed by small arms and nuclear weapons.

This book can be purchased from the www.spokesmanbooks.com or www.action-for-un-renewal.org.uk or www.vmpeace.org. Published by SPOKESMAN for Action for UN Renewal 2005 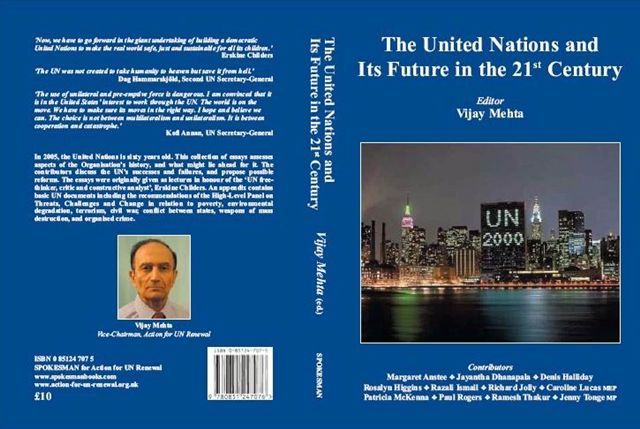